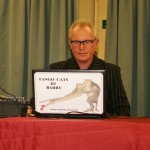 Barry’s passion for tango and its music was awakened when a French tango teacher Marion Ouazana moved into the Bedford area in the late 90s and began regular classes.

Since that time Barry has made a study of the dance and its customs, including several trips to Buenos Aires to dance in the traditional Milongas and to steep himself in the music.

Every event that Barry DJs only the very best in traditional danceable tango music is played with attention to the requirement of the dancers, including a theme with cortinas (short musical curtains) chosen to suit the event.

Barry believes in the codes of traditional tango dancing with good etiquette and floorcraft “line of dance” and respect for others on the dance floor, his music comes mainly from the Golden Age of tango.

When this happens, it's usually because the owner only shared it with a small group of people or changed who can see it, or it's been deleted.
View on Facebook
· Share

Keep your Tango ALIVE with our growing collection of Online Classes…You CAN develop your tango at home, and we’d love to help you.See what our online students are saying about the classes, plus a new welcome video on our website…[www.oriatango.com/online-tango](www.oriatango.com/online-tango)7 Day FREE TRIAL 🙂Happy Dancing and see you on the virtual dance floor soon!Jenny & Ricardo ... See MoreSee Less

New Preview Video!It’s great so see so many of you signing up for our Online Tango Classes. Please let us know if you are getting on well with them. If you are wondering what it’s like, here’s a glimpse of what going on at them. More videos being uploaded every day at the moment….[www.oriatango.com/online-tango](www.oriatango.com/online-tango)We have also introduced a brand new idea of VIRTUAL ASSISTANCE so you can get the corrections you need. Via VIDEO FEEDBACK.Abrazos and stay safe.Jenny & Ricardo ... See MoreSee Less